This is our core group of dogs that helps with training and socializing our adoptable, sanctuary, and rehab dogs.
For dogs that are up for adoption, visit our adoptables page or our peas and carrots page. 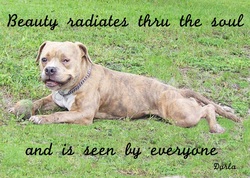 Darla.... formerly Stinky Dinky. Simply amazing dog. This was love at first sight, boy was she a mess! Now she is the real founder of Pibbles to the Rescue and she reminds me every single day why I do what I do to help the pibbles that need just a little bit more attention than they ever got before. Time and patience goes a long way.. just look at the results written all over her face. 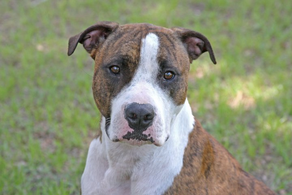 Champ was the first 'aggressive' dog to be released from HCAS into our care after failing a PBA test.  Champ is now rehabilitated, socialized, trained in obedience, has his AKC Canine Good Citizenship (after first passing about a dozen other PBAs).  Champ went on to be a service dog, providing emotional support to his first furmom, she returned him to pibbles to continue his work.  Again taken in as a service dog and emotional support to a beloved service dog while she fought cancer; Champ was with his wife Jade, by her side till her last breath.  Champ stayed with his surrogate mom until she found another service dog and is now again the pibbles demo dog, putting in his community hours and helping us spread the word about responsible dog ownership, BSL and educating people on our favorite breed, pit bulls. 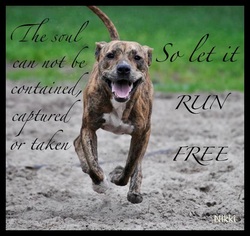 Salem originally came to us for a stay over... but the pibbles dogs just absorbed her so easily as an official pack member we couldn't live without her.  Salem is now the second female in command and learning the ropes to be a fair and balanced leading female for Pibbles.  She has saved so many lives in our camp. 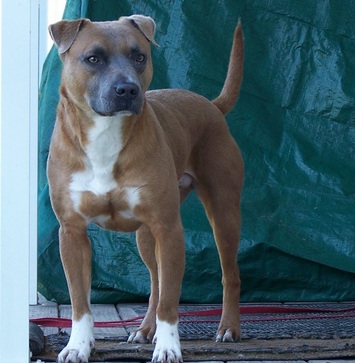 Pongo is one of six to survive kennel life in the Investigational Kennel during the judgment of an abuse/neglect case. His 4 other siblings and his mom were saved and were part of the pilot group in a program for the HCAS volunteer based dog training. This handsome devil still has some fear issues of people (hard to blame him for that) but he is an amazing pack dog. Without him my efforts to rehab behavior dogs would take sooo much longer. He is a blessing and a permanent member of my pack.

UPDATE:  Our dear Pongo was just diagnosed with MCT grade 2.  Good news is he qualifies for a new research study that could save lots of puppy lives.  His bloodwork, urinary screening, lymph node screening, abdomen scan and chest scan are all clean!!!  A biopsy was done of the tumor and sent off for research.  Now Pongo will be testing in a double blind study on a new medication for MCT.  Pongo has a 50/50 chance of getting new medicine.  If for any reason he does not get a cure or gets a placebo, pibbles will be proceeding with surgery to remove the cell and keep paws crossed that it does not come back.  This amazing creature gives, gives and then gives more, saves lives by being a balanced, proven dog's dog, helping rehabilitate, socialize and sponsor dog after dog, loves his job and loves his pibble life.

In the words of a volunteer that worked very hard to save Grace:  She was dropped off at the SPCA of Central FL in I believe July of 2010.  She was an owner surrender, she came in still full of milk, but no puppies were turned in with her.  She was about 9 months old at the time.  Once she was cleared for the adoption floor she was housed with another female with no issues.  Her issue was  toy guarding.  In October of 2010, Grace accidentally bit a volunteer while going for her ball.  She was then taken to Orange County Animal Services for a 10 day quarantine.  When her quarantine was over, she passed her behavior eval, and we scrambled to find a rescue for her.  We found a rescue in Spring Hill/NPR that would listen, wheeled and dealed, paid the pull fee and transported her after her spay to Spring Hill.  She was in foster care with that rescue for about a year, then returned in very poor condition, overweight, full of ticks, etc.  She was left unattended for an extended amount of time in an open room with another dog which eventually ended in a fight but no one was there to see how it began, what happened and so forth.  Pibbles was called in to take Grace in since that rescue was closing their doors.  Pibbles has been able to find grace a job she loves ... frisbee!  Grace was adopted out last year to a Las Vegas performer but Grace was not able to bond with them so she was returned after one too many trips out of the stage area and into the crowd... and sometimes through the fairgrounds and into the wine and cheese tent (LOL).  Since Grace's return, she has been packed with the alumni of Pibbles, which includes PC, our 3.5 pound chihuahua.  Grace shows no signs of aggression, likes the company of the other dogs, demands her frisbee time 1:1 at least 3 times a day.. rain or shine!  Grace will be performing at local disc dog events as a novice to show off her amazing skills and love for the frisbee.  Come see her jump! 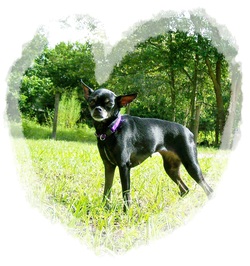 Meet PC (peas and carrots), FKA Chi Chi, a 3lb Chihuahua.  She was at Hillsborough County Animal Services because she was a vicious chicken eater and was considered a hazardous bite dog. She is now part of a pack of pitbulls, hasn't eaten a chicken in years and only bites when provoked. 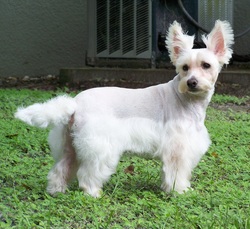 Don't adjust your screen... he is a westie, kinda.  This is his personal designed cut but you wont be able to convince him he is anything but a pitbull.  Frankie's original furdad unexpectedly died, while home on a short downtime between jobs.  We are not sure how long it was before someone found him and his daddy but it was pretty traumatic for this little guy.  Frankie came to pibbles as a birthday gift and ended up bonding with Shadow, his bestest buddy ever!   Now, Frankie is an honorary pibble, lives with the pibbles gramparents and helps us do our final tests on the dogs that have succeeded in our camp when they are ready to be available for adoption.

Frankie visits the pibble camp several times a week to get his pibblin fix. 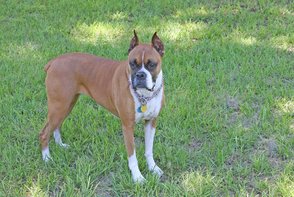 Simone was rescued from the hot sun of Texas.  Originally came to stay with the pibblemom before she knew she was a pibblemom for some fixing as a favor for a business friend.  Simone was 100% redzone, hateful to everyone and everything, cage mangler and hoodini extrodinare!  But... Shadow won her heart.  Years and years later, this beautiful creature has learned to love and be loved.  Simone loves kids AND dogs big & small.  Unfortunately, Simone was diagnosed with MCT Grade 2 last year, which is inoperable :-(

Currently Simone has no idea she is sick so we just love her as much as possible and hope she is able to live out a comfortable life as an elder-bull before ever realizing she is sick.  We are considering an alternative holistic asian treatment that will help reduce swelling/pain. 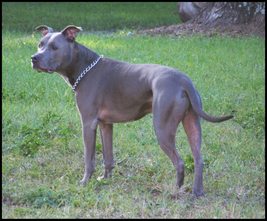 Shadow came into my life as part of an unexpected litter after his Champion father was retired.  Not expecting to have another litter and scrambling to find homes, I was offered one of these gorgeous pups.  Accepting that I could not claim his champion lineage I set off to just make my dog as balanced as I could by socialization and obedience classes.  Ready to test and pass his AKC Canine Good Citizenship, being a star student at the Royal Crown Learning Academy in Austin Texas, Shadow also was an ambassador at the dog parks and in play groups.... until the day came when he was viciously attacked by 3 stray dogs at a dog park.  It was that day when I felt the full brunt of how people were not willing to help this breed.  Not being able to allow myself to watch my wonderful pup get ripped to shreds by 3 dogs twice his size, I dove in.  It was only then that people were willing to help run off the offending dogs (only after I had been bitten several times of course).  Nonetheless, the damage was done.  My precious pup was never able to trust my leadership again, nor other dogs.  Dog aggressive, Fear aggressive, stressed out, no longer obedient, I tried so many alternatives in training to try to get my dog back to where he was and failed.  Then I was asked to take in two aggressive boxers to help rehabilitate or they would be euthanized and I thought... what if these three aggressive dogs could some how learn to trust again by helping each other?  Crazy right?!?!  Shadow and his wife Simone are now bonded, it took several painful years but then upon moving back home to Florida we took in Champ, then Darla and now over a dozen dogs have come through their pibble camp and went on to have wonderful and fulfilled lives.  Shadow, my first rehab was my own dog, even now he is not completely balanced but lives HIS life helping socialize and rehabilitate other dogs in the protection of his home.  Shadow, Leader of this Pibbles pack, protector, squirrel evictor, companion, champion (of our hearts), social misfit, professional aggressive pibble sponsor extraordinaire.     ~Kordero's Indigo Moon

PUPDATE:  R.I.P.  We lost this angel July2015.  In hindsight, we believe he was staying strong for his beloved Simone.
Never sick a day of his life but when Simone passed, he basically just gave up.  The devestation to the pack was beyond words.
Shadow helped so many pibbles get a new leash on life.

“He is your friend, your partner, your defender, your dog. You are his life, his love, his leader.
He will be yours, faithful and true, to the last beat of his heart. You owe it to him to be worthy of such devotion.”

ps. the other boxer/mastiff, Theo(dore), is now attending play groups, daycare, does agility and has passed his AKC Canine Good Citizenship with his furever furmom, still in Texas and sends pibbles updates several times a year to check in.
Powered by