These are the "fixer upper" dogs of Pibbles.  We work closely with them on obedience and socialization
in hopes that they will be adopted or returned to their owners with much better manners!

More info to come on this guys beginnings at HCAS.  But what we do know is after being in the shelter too long this volunteer favorite and A.D.O.P.T. graduate began to deteriorate with his kennel presentation and stability to the point he was not gonna make it out.  His biggest fan Pam called on Pibbles to give this guy another chance.  Before HCAS could pull his photo and only being at our camp a week or two... his new  furmom fell in love and hunted him down!  Two-Toes got his name change at a christmas photo event at PETCO when a dear friend of pibbles coined the name Deuce, which made this vivacious boy bark excitedly to show he approved.  Deuce stayed with Pibbles for months, having sleep overs until one day his new furmom had to give him back due to changes in her life.  Deuce now has a new pack (littles and bigs alike) and is continually learning how to accept all types of people, building trust guidance every day. 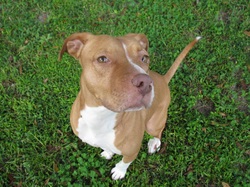 Peaches was saved by a local woman in Tampa after living her first years of her life on a chain. She was a victim of abuse and has been attacked while on that chain several times by other dogs. As part of her training she is on a slow process of learning trust with other dogs and improving her social skills in the Pibbles camp. Peaches LOVES people and children but is not tolerant of any other animals yet. 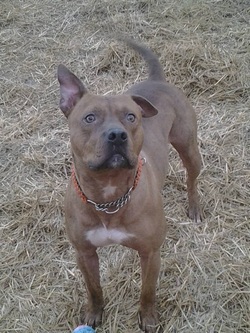 Originally from the HCAS A.D.O.P.T. program, Jamison was a popular dog in playgroups as well.  Once placed in foster system, he was the unfortunate victim of several attacks by the resident dog.  After the final spat, Jameson returned to HCAS for surgery and then was released to Pibbles for some much needed R&R.  Now named Tiggrrr, he found he loves chasing tennis balls, catching frisbees and making laps around the firepit.  Not yet able to completely socialize him, Salem has taken a shine to him and so far she is the only pibble in his circle with supervised visitation. 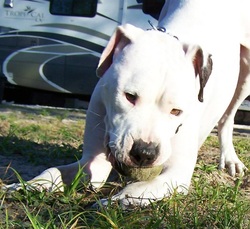 Originally just a snot nose puppy from HCAS, this cute little guy was so smart and it's a good thing since he is unfortunately deaf. He was adopted in 2011 to a loving family that understands his special needs..... but in 2012 he was returned when he got tooo big. Pibbles is taking Toby back into the pack, get him back on target and then into a real furever home.

Bailey (in partnership with Rugaz Rescue) 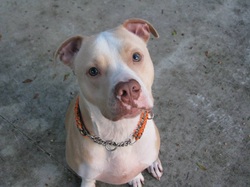 After being in foster care for a while, Bailey has shown unstable signs of aggression towards various stimuli, acting out in public and poor leash behavior.  Bailey will be at Pibbles for a while until he can learn proper meet/greet behavior with other dogs and start going out in public again.
Powered by