In loving memory, this page is dedicated to Sandie, our elder-bull.  We unfortunately lost her to pneumonia at age 11.
Run free, sweet darling.

Sanctuary dogs are not available for adoption to the general public.  These dogs are not socialized, have human aggression issues, are hard red zone aggression cases, are potential risk to their own well being or are just flat-out destructive. These dogs are cared for solely by the pibblemom and receive her individualized, undivided attention several times a day.  These dogs will be with Pibbles long-term and possibly for the remainder of their natural lives.  While pibbles is not able to provide sanctuary to as many dogs as we would like, please realize we are the last and only option for the dogs we agree to take in, that being said we try every training technique we can in an effort to reach the dog currently in our care.  However, there are times when we too have to accept that there will sometimes be a dog that is just too much of a risk to themselves or society to be able to continue on in our program and the unfortunate decision is to agree to euthanasia.  In 10 years, pibbles has only had to say good bye to two dogs.  Pibbles makes every effort to pay it forward, with that being said the two dogs lost to us were organ donors and their contributions to an emergency care clinic were able to save several precious lives. 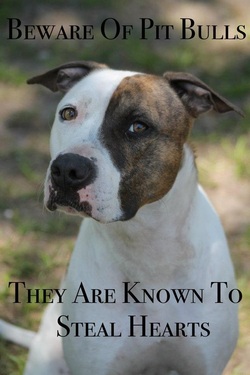 ‘Puppy in a trash can’ rescue was really an owner surrender but put on the form as a stray.  Petey (aka BamBam) was kept inside, not socialized as a puppy and showed intense separation anxiety when brought back to the Pibbles camp the day his family gave him up.  Several destroyed kennels and two years later, Petey now has 5 dogs in his current pack (depending on his mood) and shows a fondness for the frisbee.  Petey is a permanent resident of the dog den, monitors all new dogs coming into the camp that stay in his room and is also a blood donor. Yes, our boy is a lifesaver!!

Incredibly selective, sassy "shit talker", a loner, overwhelmingly confident and extremely dominant, Petey is under constant supervision and is never left unattended with other dogs, EVER. 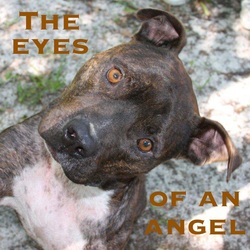 Cody was an HCAS investigation case surrender. He was confiscated as a neglect/abuse victim. He has recovered from one of the worst cases of mange reported.  Cody has had several surgeries on his way to recovery over the last 2 years and he was originally heartworm positive but now is heartwrom negative and is a blood donor. Yes, our boy is a lifesaver!!

Pibbles is working on building his social skills but Cody has escaped from handlers and his fenced in back yard several times, loves the 'hunt' (especially chickens) and can no longer be untethered.  On a long line, Cody is very obedient and does several tricks.  Cody is now more of a house pibble.  With a small pack of 5 ( inside of course ) his favorite all time pibble is Darla, his original sponsor.
Powered by